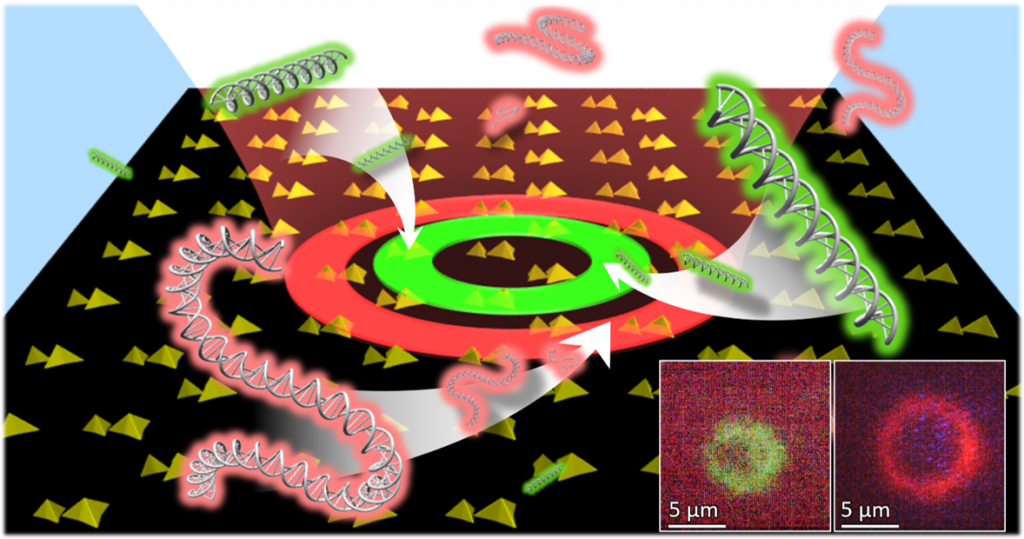 We demonstrate the size-dependent separation and permanent immobilization of DNA on plasmonic substrates by means of plasmonic optical tweezers. We found that a gold nanopyramidal dimer array enhanced the optical force exerted on the DNA, leading to permanent immobilization of the DNA on the plasmonic substrate. The immobilization was realized by a combination of the plasmon-enhanced optical force and the thermophoretic force induced by a photothermal effect of the plasmons. In this study, we applied this phenomenon to the separation and fixation of size-different DNA. During plasmon excitation, DNA strands of different sizes became permanently immobilized on the plasmonic substrate forming micro-rings of DNA. The diameter of the ring was larger for longer DNA (in base pairs). When we used plasmonic optical tweezers to trap DNA of two different lengths dissolved in solution (φx DNA (5.4 kbp) and λ-DNA (48.5 kbp), or φx DNA and T4 DNA (166 kbp)), the DNA were immobilized, creating a double micro-ring pattern. The DNA were optically separated and immobilized in the double ring, with the shorter sized DNA and the larger one forming the smaller and larger rings, respectively. This phenomenon can be quantitatively explained as being due to a combination of the plasmon-enhanced optical force and the thermophoretic force. Our plasmonic optical tweezers open up a new avenue for the separation and immobilization of DNA, foreshadowing the emergence of optical separation and fixation of biomolecules such as proteins and other ncuelic acids.